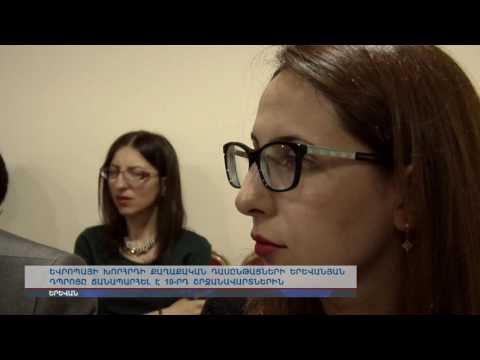 On 8-10 November 2017 the 12th generation of the Yerevan School of Political Studies participated at the 6th Edition of the World Forum for Democracy together with participants of 21 Schools of Political Studies of the Council of Europe, to debate and share their opinions on the role of political parties and media in the context of rising populism.

The objective of the World Forum for Democracy 2017 titled “Is Populism a Problem?” was to review novel initiatives and approaches which can enhance democratic practices and help parties and media, but also other political actors, to reconnect to citizens, make informed choices and function optimally in 21st century democracy.

YSPS representatives actively participated in the event through a series of panel discussions, debates, labs, lightening talks and plenary sessions in the hemicycle of the Council of Europe. A series of additional events were offered to participants of the Schools of Political Studies. Yerevan School representatives visited the European Court of Human Rights and met Mr. Armen Harutyunyan, Armenian Judge at the European Court of Human Rights. The meeting reached its objective through a broad spectrum of questions and answers and discussions.

YSPS participants had also a meeting with the Armenian Permanent Representation to the Council of Europe.